FreeBSD 10: does SWAP work on a ZVOL?

TL;DR: No, keep them on separate swap partitions.

I’m working on a secure ZFS installation for my home NAS and plan to use ZFS as the filesystem. One goal is to have everything on disk encrypted.

While the new FreeBSD 10 installer can automatically partition your hard disk with an encrypted ZFS setup, the swap partition is not encrypted.

I also plan to mirror the swap space, so that if one disk goes down in my RAID 1 (or zmirror) setup, the system will keep running. If you placed a swap partition on each disk in a two-disk setup and they were not mirrored, the system would crash if one disk became unresponsive.

So my first idea was just to store the swap space in the ZFS pool instead of creating a separate swap partition that would need to be mirrored and encrypted.

Now, there are two options to store swap space on a ZFS pool:

The second option the internetz suggests is to create a ZVOL and use that as swap space. That seems to work on first sight, and even Sun/Oracle suggested it in a blog post.

Also, the FreeBSD Wiki has something to say on how to create a ZVOL usable for swap space:

But they added a note:

If there is no real memory available, the system might become unresponsive.

Because storing the swap space in a ZVOL would be much more convenient (at least if you don’t need kernel crash dumps, which wouldn’t work this way), I wanted to try for myself.

I wrote a little C program that just allocates memory and then waits for 10 minutes so that the memory is not immediately released:

You can compile and run the program on a vanilla FreeBSD installation by running:

My test system is a VMware virtual machine with 256MB RAM.

Now let’s see how the system behaves if we run memory.c on an installation with a normal 2GB swap partition: 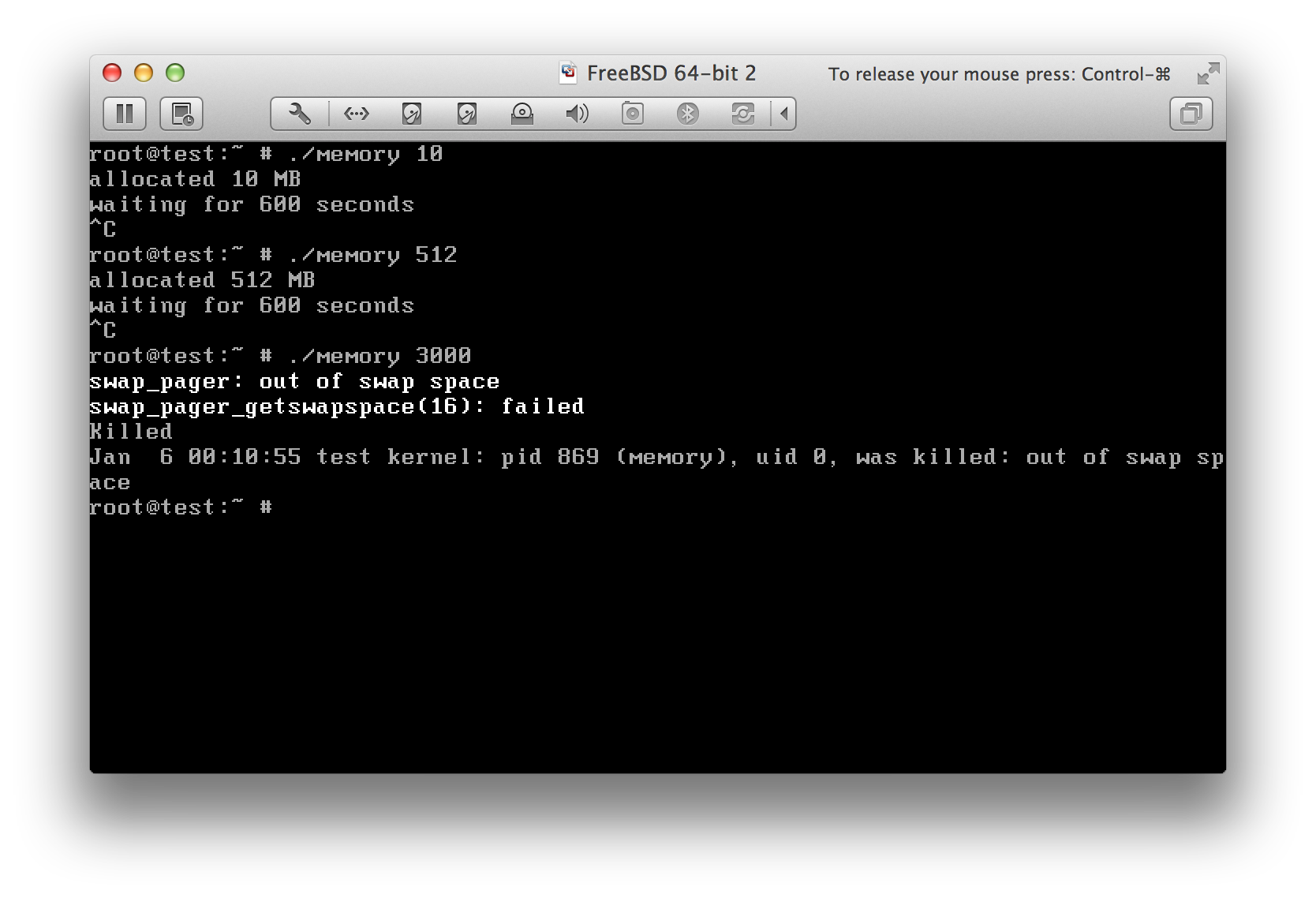 The system stays responsive and kills memory.c as soon as it runs out of swap space.

Now let’s try the same thing with the swap space on a ZVOL: 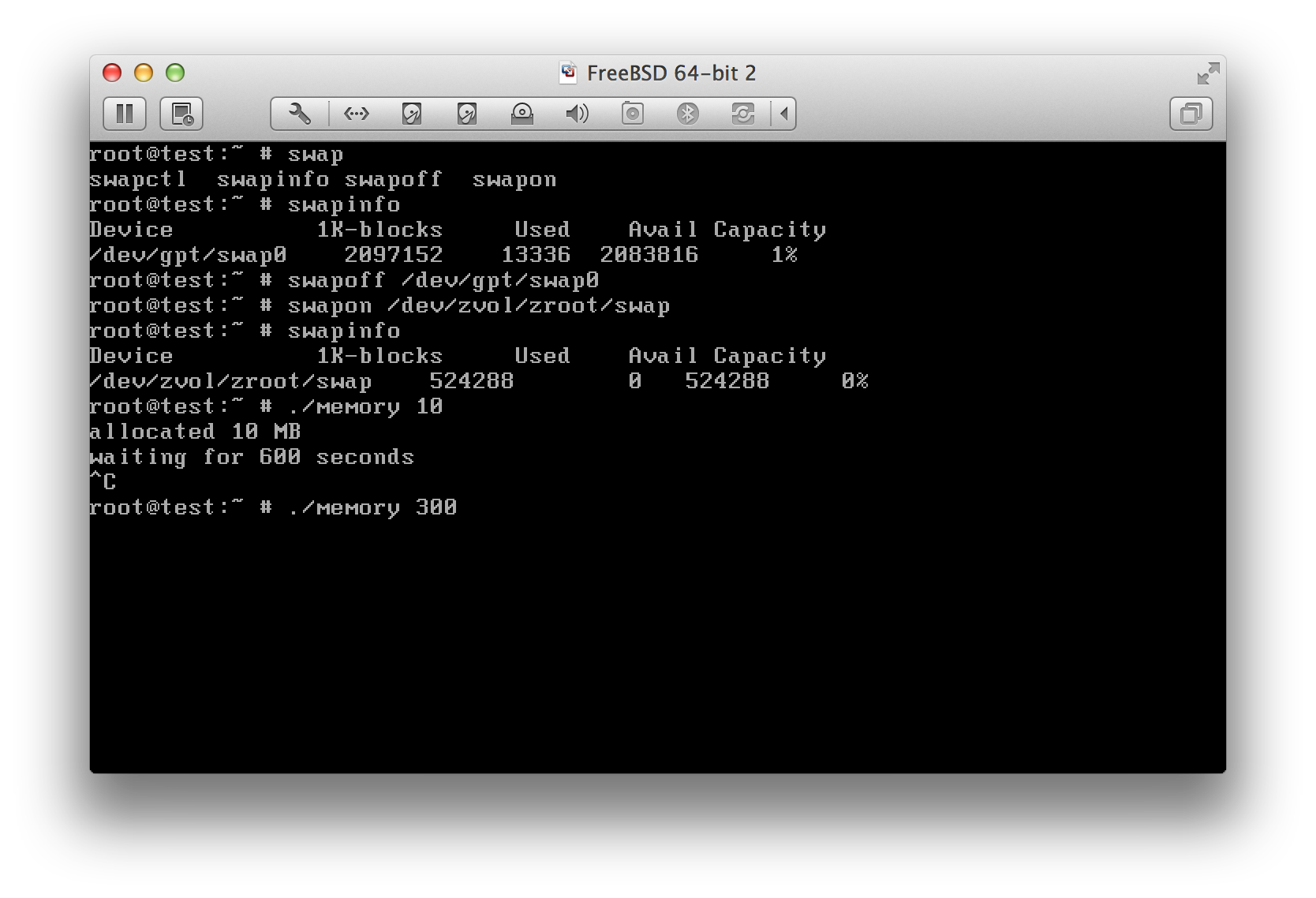 It still replies to ping requests, but it has stopped being responsive. You cannot kill memory.c or do anything else useful. 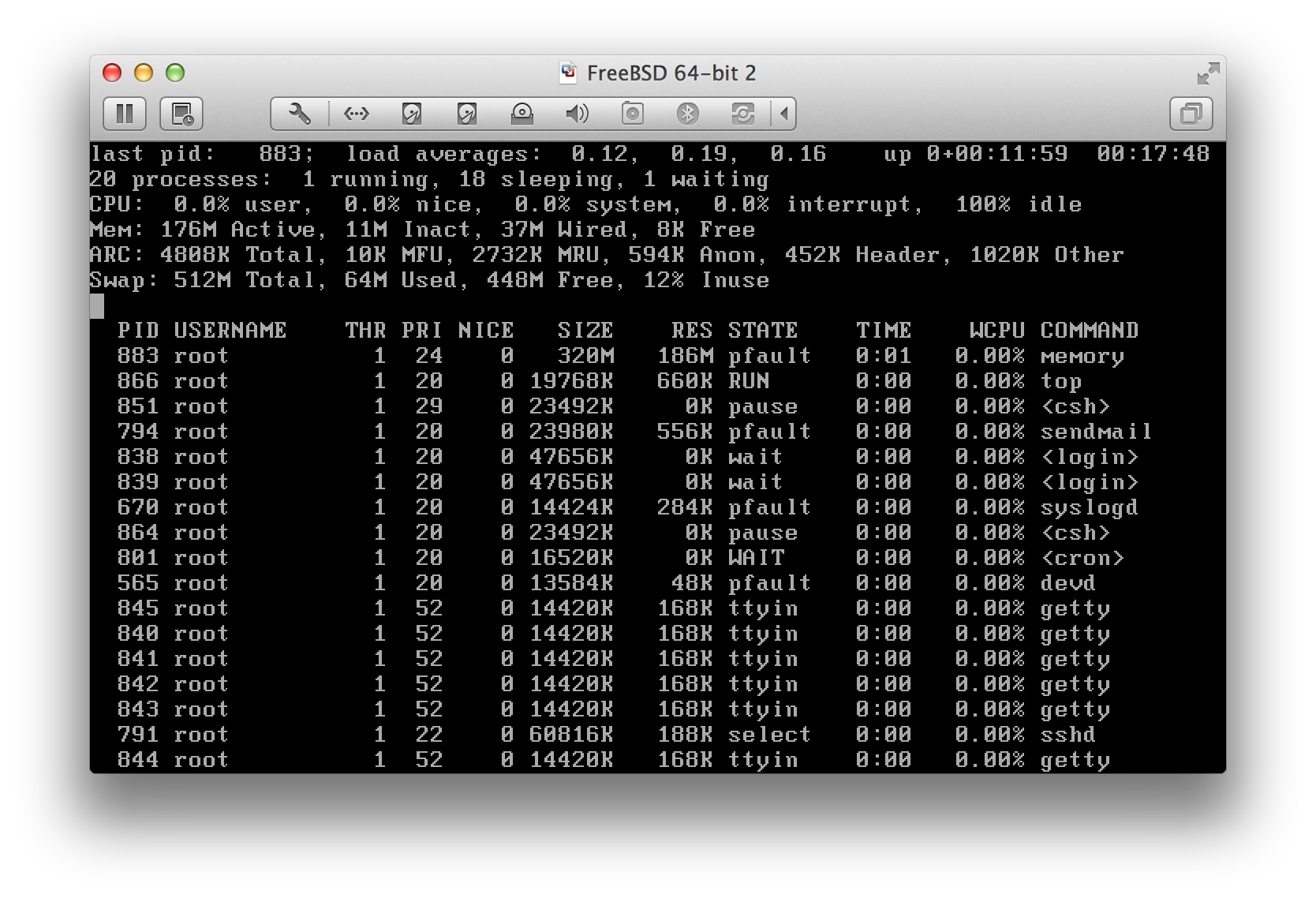 As you can see in the top output, which I had running on the second console, the system has 256MB RAM and 512MB swap space. So the 300MB shouldn’t even have used up the whole swap space.

And if you can trust the top output, it crashed with only about 60MB of swap space used.

Some people have suggested reserving memory via kernel parameters (in that case ZFSOnLinux), but I’m aiming for a stable, maintainable system and reserving memory might just delay the problem, if it helped at all.

So the way to go is to keep swap space off ZFS and use separate partitions - like the FreeBSD 10 ZFS installer already does.